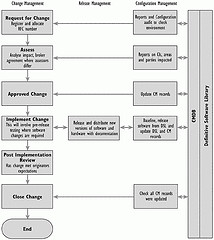 In ITIL, the process which I find most challenging to really understand fully is the Configuration Management Process. Image by Cote.

One of the key / heart for every organization which implements ITIL processes is the Configuration Management Database (CMDB).

When I was studying on ITIL, I always wonder what should go into a CMDB. Is it just a transactional database like the common MySQL or SQL Server databases?

Drilling in further about CMDB, I found out that the purpose of a CMDB is to store configuration items (CI) which acts as a structural unit in a CMDB.

Examples of configuration items (CI) include:

Basically anything related to IT which can be tagged with the following attributes can be considered a CI:

Let’s take an example of a CI, say the database server. The database server can be considered a CI as we can identify its ownership, the relationship of the DB server with the other application servers as well as state its technical attributes such as MySQL or SQL Server.

In essence, the purpose of a CMDB is to store lots and lots of CIs and eventually be able to show its relationships for the analysis purposes.

In real life scenarios, IT Managers should refer to their CMDB prior to making an IT decision. For example, if an organization decides to remove their Exchange server and host their unified communications with Google, they can check through their CMDB. The CMDB might just reveal that the Exchange server has been tightly integrated with other critical applications within the organization.

In the past, I always had problems finding out how organizations can implement a CMDB to manage all their configuration items. Today, I stumbled on this site called EasyCMDB which provided me more insights as to how CMDBs work as a whole.

With EasyCMDB, you can record all your IT components and define the relationships between them easily.

One key feature of EasyCMDB is the Relationship Navigator which produces a diagram showing you the relationships to a CI. 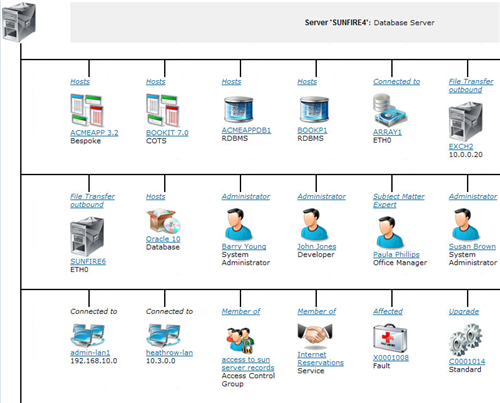 From the screenshot above, you can see how the Relationship Navigator visualizes your CI relationships and even allows you to edit the CI record together with its relationship details.

Besides providing Configuration Management functionality, EasyCMDB included features from the other ITIL processes as well making it complete system which supports most ITIL processes. The additional features covers the following processes:

One feature which caught my attention was the change requests management, which allows users to submit request for changes. Before a change can be made, it must firstly be approved by the person in charge. Only then will the change be worked upon.

By implementing EasyCMDB, some customers have also benefited during their ISO 20000 audits as many of the processes and configuration items have already been recorded.

Check out EasyCMDB to find out more about the web-based ITSM application today.