Recently a friend of mine just got himself a new Intel Solid State Drive (SSD) Hard Disk Drive and plans to migrate the content of his old hard disk into the new SSD.

Although he could just begin fresh  by installing an operating system in the SSD, he wanted to save time by finding a way to easily move everything that is on the old hard disk into the new SSD which includes the OS, installed programs and data.

In case you’re wondering how a SSD differs from the ordinary (spinning) hard disk drives, the following are some key differences where an SSD:

I believe in the near future, SSD will become very common and slowly replace the bulky and heavy hard disk drive for storage purposes.

So I did a quick search and found out that Intel came out with an Intel Data Migration Software which is powered by Acronis to allow Intel SSD users to clone their old hard disk to an Intel SSD. 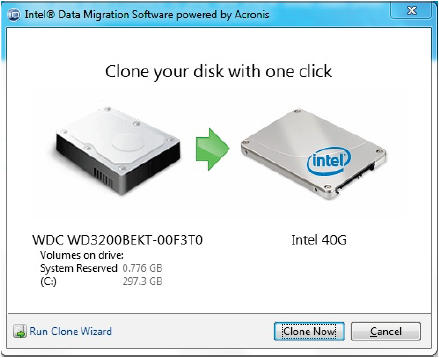 One requirement that I noticed before you can begin cloning your disk is to ensure that the size of your old hard disk does not exceed the max capacity of the new SSD.

Meaning, if your Intel SSD is only 40GB in size, you’ll need to ensure that the content of your old hard disk does not exceed 40GB. Otherwise it just won’t work.

In summary, these are the summarized steps on how to migrate an old hard disk to SSD using the Intel Data Migration Software: